When FFC member Chip Austin reported his 11.5lb. Lake Griffin catch back in January I thought to myself that it’s gonna be quite a while before we see another fish that size. Well that “quite a while” turned out to be just under two weeks! Check this out. On February 1st I got a text message from FFC member Lou Benasutti stating that he had caught the “Fish Of The Month” for February. Knowing that some anglers tend to stretch the truth a bit by holding their catch close to the camera making it appear bigger or just guessing the weight but as I scrolled down I saw that Lou had attached some pics.

Well the scale pic said it all, 11lbs. 8oz. and caught in a Villages pond!

FFC member Frank Martines was close by, snapped the pics, and assisted Lou in registering his “Trophy Catch” with FWC. It was approved and along with a cool t-shirt Lou took advantage of the $75 off a Enigma pole and plans to order a fiberglass facsimile of his catch from New Wave Taxidermy. WTG Lou!!

For some reason fish have been “Socially Distancing” themselves from anything that I have thrown but others have been quite lucky. On February 20th, FFC member Wayne Barksdale reported a 8lb. 6oz. Lake Griffin catch taken with a Magnum Junebug Bug. 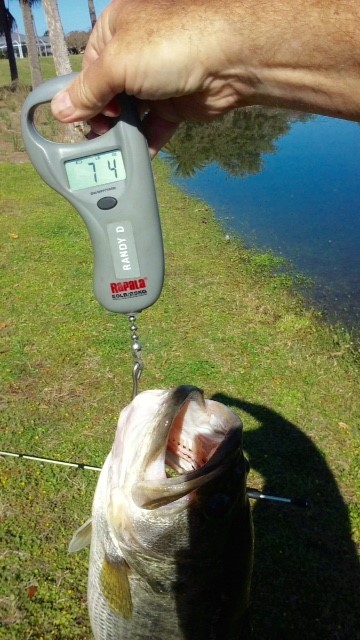 and FFC member Rich Haessley reported a 5lb. 12oz. and a 4lb 1oz. taken with a wacky rigged Senko at Poinciana pond.