This months clinic was held at the Miona Rec. Center pond. Fifteen members were shown how to rig and fish a “Creature Bait” Methods discussed were the Texas Rig, Carolina Rig, and Drop Shot. Due to the fact that our retention ponds are very shallow, the Texas Rig is the most productive. Baits, hooks, and weights were provided and after some instruction and a short Q&A session, things got under way. Only minutes into the meet, Marni Strautman discovered that Catfish eat creature baits to. Not the target species here but it still counts as a catch. Marni did manage to reel in two Bass proving this method does produce. 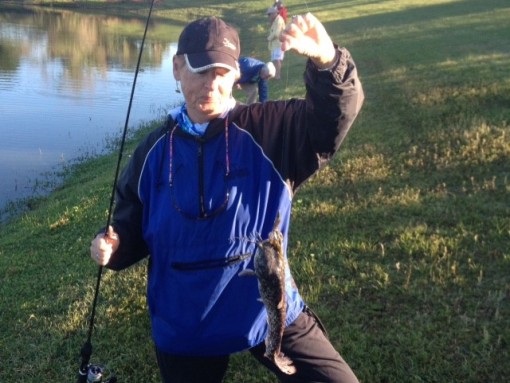 After an issue with his line and the need to re-spool, Phil Loewenstein reeled in the biggest fish of the meet. A nice Bass weighing in at 3lbs. 12 oz.

FFC member Jim Jones added one more to the count and Bob Armbruster had one break off.
All in all it was another fun event.
Only one more clinic before the summer break so if you would like to be part of the fun, be sure to sign up at the May meeting.
Rob Husson