Posted on February 20, 2018 by tvfreshwaterfishingclub

Ah yes – what better thing to do on Valentines Day than to go fishing…and especially when the finned freaks of nature, as Dave Mercer calls them, are cooperating and not on one of those “Hi…I’ve lost 50 pounds by eating cheesy nachos & drinking diet CC on the rocks”…per Marie Osmond. I think that’s what she said – maybe. Yeah anyway 🙂

I never get tired of seeing this guy shine by catching another Trophy Catch qualifying bass that weighed 8 lb 7 oz. He has definitely got the knack and patience. Wayne Barksdale says he caught this bass using a slow moving ultravibe worm. To date, there’s nobody else that’s been featured on here that consistently catches fish this large. Nice job Wayne.

Jerry Echols, former FFC President, is well known for his crappie fishing success. Echols fishes open water with spreaders on his boat that pre-positions all his rods consisting of 8 or more. Just imagine going through a school of specks, as they’re known in the south, when all the rods start bending toward the bottom. Echols tips small jigs with minnows with his boat cruising at a snails pace. This master has been scarfing up slabs like this for years. It was nice to see some results after hearing about his success for so long. Keep em coming Jerry! This fish equates to 2 lb 5.28 oz. 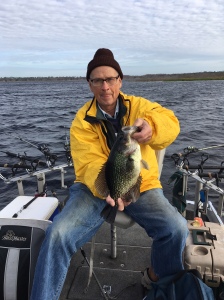 Okay – so Jerry Echols isn’t in the boat alone…although some of us have timers set on our camera phones. On this day he had FFC Board Member Trevor Bailey along and wouldn’t you know it Bailey catches the largest speck of his life that weighed 2 pounds 12 ounces. WOW! This is almost enough to make me switch to speck fishing. These specks are lifetime achiever catches for sure. WTG Trevor & thanks to your guide too.

The FLW TOUR starts Thursday Feb 22 thru Feb 25. Daily launching and weigh-ins are conducted at Venetian Gardens in Leesburg. Lets get behind Leesburg’s own, Tim Frederick, and wish him another win on the FLW circuit. Frederick walked away from the Big “O” with a nice check and Angler Of The Year (AOY) lead. Keep on keepin on Tim. See you on stage day 4.

Heading home after a Tuesday club tournament on Feb 13, I put my toys away and closed the garage door. The next day my wife walks out thru the kitchen into the garage to get in her car. She casually mentions that the garage smells like fish. I figured it was from a 3.3 lb catfish that I slammed on the deck after he’d devoured a lipless crankbait. Slimy thing…I only wanted my bait back. It’ll dissipate, I thought. Friday…where in the hell is the fish smell coming from? I looked throughout the boat propping open all lids to no avail. As I walked around the boat, from the floor in the garage, one side in particular smelled worse than ever. I leaned under the boat only to see a tail protruding from the trailer bunk. My theory was that prop wash, while loading the boat on the trailer, washed this dead bass onto the bunk of the trailer…only to be squished by the boat. I’ve had tree limbs, lily pads, and always hydrilla on my trailer but NEVER a squished fish. I took the boat close to home Friday night and off loaded it from the trailer. Surprise surprise….Did I mention that my wife had made reservations at the Waterfront Inn until I got the fish smell out of the garage? Nah – I didn’t think so.

There’s a lot happening this week. Check our meetings/events calendar on here and pick someplace to go.