Posted on December 27, 2017 by tvfreshwaterfishingclub

January:  We started the year off with a bang and had none other than Shaw Grigsby who always had plenty of information for all anglers. It was at that meeting that Shaw was joined by underwater photographer & professional angler Kim Stricker of television show Hook N Look.

February: We had another professional angler from the Bassmaster Elite Series….Terry “Big Show” Scroggins. Terry discussed his techniques that he uses on tour and showed different tackle and how he used 4 lb test to fish for smallmouth bass while fishing Douglas Lake during a Bassmaster Tournament. We even had webmaster Jerry Lester catch a bass on a lipless crankbait in February.

March: On March 11 FFC members went to tour the Florida Bass Conservation Center near Webster. Although few attended, this place is the birthplace for Florida Strain Largemouth Bass that is sought through out the U.S. and abroad for stocking purposes. If you’ve never been, this is a very educational outing and lasts about 2 1/2 hours with a visit into the hatchery itself to see the HUGE bass that they use for breeding.

Fishing League Worldwide (FLW) held a tournament on the Harris Chain with daily weigh-ins at Venetian Gardens. It brought out almost 200 cast for cash professionals along with amateurs. First place for the professional angler was $100,000. Leesburg Florida native Tim Frederick placed 14th. The winning amateur won a new boat.

The Villages Bass Tournament, held on Mar 22, had 37 anglers catching a record total of 28 bass. First place was Rick Clark with 5 that weighed 5 lb 12 oz. Second place and big bass went to Ken Fox that had 3 bass that weighed 4 lb 2 oz. Fox’s weight included the big bass for the tournament that weighed 1 lb 11 oz. Third place angler was Dave Makarewicz that had 2 bass that weighed 2 lb 8 oz.

FOTM was caught by John Hendry while at Lake Okeechobee that weighed 10 lb 8 oz. 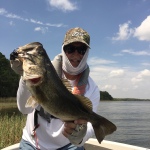 (Top to Bottom) Wayne Barksdale shows off a nice Lake Griffin 6 pounder he’d caught on a swimbait while myself caught a 4 lb 7 oz bass on a hollowbody toad. Trevor Bailey hoists a 7 lb 8 oz bass.

(R) Chip Austin shows off a 5 lbr he’d caught while on a FFC trip to the Withlacoochee River set up by Steve Felix.

(C) Then there’s Jerry Echols displaying a nice catch of crappies he’d caught down near Kissimmee.

Rick Clark submitted these 2 Trophy Catch qualifiers. One weighed 8.14 lbs & the other weighed 8.8 lbs.  Although these were caught a few months ago, it is to your benefit that you join Trophy Catch & reap the rewards. It’s free. This is mentioned often throughout the year at meetings.

Here’s a picture of a bass that was released and caught again. Look down the throat and see the hook that the fish had swallowed. This bass weighed 2.4 lbs and swam away freely to be caught again another day. What about Wayne Barksdale’s 8 lb 10 oz bass he’d caught on a 10 1/2″ worm dragged slowly across submerged vegetation.

Here’s a pair of tilapia that were caught by FFC President Randy DiSanto and FFC member Wayne Barksdale. Most all central Florida lakes have these fish. My guess is that Barksdale won this battle. Then there’s Phil McNeal holding a 4.15 pound bass he’d caught on a Spro Aruka Shad Lipless Crankbait fishing Griffin.

Don Millich displays 2 that he’d caught using black toads in the pads on Lake Grifffin. Both fish weighed over 4 pounds. Although these aren’t your everyday occurrence, it’s not unusual either to catch bass of this size and much larger. They exist in almost every pond in The Villages too.

VP Rob Husson catches a double of 7 pounders in 2 days on his favorite bait the Yum Dinger. Husson is living right or the fish are cooperating. This is his 4th fish over 7 pounds so far this year. Husson has since been given a selfie stick.

Sam Anderson, my grandson, catches his first largemouth bass that weighed 1 lb 5 oz. I think the smile says it all.

John Hendry, while fishing a Lake Harris bass tournament displays his big bass that was enough to also give him first place. Big bass weighed 5.34 lbs & his total weight for 5 fish was 12.20 pounds.

Here’s a gift from the heavens during the solar eclipse. This gorgeous cloud formation along with the eclipse was what I encountered during a fish outing. The bass didn’t cooperate though.

Lake Deaton water level went from below the scale in Feb 2014 up to 63.55. At one time you couldn’t launch a boat with an outboard hanging off of it. Kayaks & canoes were ok. It raised over 30 inches. Deaton can be a sleeper lake….it produces some huge crappies and large “numbers” of bass. My largest bass from Deaton, 8 lb 4 oz, was caught in Mar 2009 and was released in a pond within The Villages. Many knew it’s location and some claim to have hooked it. Pictures ???

“Top Water” Jack Hobin caught this 3.97 lbr on a black & blue Senko from a retention pond.

I donated a lure to this toothy critter. I had my head turned when this over grown lizard with teeth ate my bait.

With hurricanes pounding Florida to include The Villages, all lake levels rose….and with that, the locks were open at the north end of Lake Griffin to lower the water level from the Harris Chain. This caused current to flow throughout the Chain of Lakes and if you knew where to find it moving, the bass were there. The river gauge is the downstream side at Moss Bluff Lock & Dam that’s located at the north end (out flow) of Lake Griffin. Normal level is from 7′ to 9′. This flows to the St. Johns River & from there to the Atlantic.

Marnie & Rip Strautman have been Rippin em, sorry Rip, a new one at the Harris Chain with guide Grady Maynard.

Bob Knorr holds a 5.34 lb bass he caught while at Kissimmee with his brother Ed and slaying them.

My latest display of how not to land a bass.

And how’s this for a visiting parent….Chip Austin’s dad Larry caught this 6.6 lbr while visiting. A picture is worth …..

That’ll do it for 2017. I hope in some way these stories have made you a better angler put a smile on your face, or just let you enjoy some of the scenery. Things are changing in the world and especially our waters. Access is being eliminated mostly due to urban sprawl, algae blooms are becoming the norm, floods are more prevalent than before. Don’t be part of the problem – but the solution.

Have a Happy New Year