Posted on July 19, 2017 by tvfreshwaterfishingclub

PM storms, hot air & water temperatures are changing things up somewhat. Slow dragging a plastic ??? across the bottom works….or does it….yes it does AT TIMES. Just when you think you’re going by the book & things are supposed to function as normal it gets FUBAR on you. (you’ll figure it out) July 11 Don Millich & I were fishing a tournament near Inverness on Lake Henderson. This wasn’t a buddy tournament….we were competing against each other in my boat. I tried my darnedest to front end him :)….but I did offer him the front deck….REALLY! I caught 2 on a white hollowbody toad in 15 min. So much for that bait after 90 min. We switched locations & started throwing worms. Me a junebug trick worm & Millich a junebug speed worm. He looked like KVD ripping that thing thru the water. Well guess what? He was getting bit. Me, on the other hand, was slowly dragging a trick worm intermittently & getting bit.  In the heat you slow down??? In the cold you slow down??? Who the hell writes these stories anyway? I’m just telling you what we used & what worked that day. Normally a Tsala Apopka Chain tournament can be won with a sack of 5 weighing 9 to 11 lbs. The results were 18 anglers caught 35 fish. 8 anglers blanked. First place was Brian Reed with 8.31 lbs. Scales weigh in 100’s. Millich & I both had a decent fish & thought maybe big bass and it weighed the same. What’s the chances of that on scales set to 100th of a pound. Our fish each weighed 2.38. Millich finished 4th over all & 1 place out of the money. And if I wouldn’t have knocked his fish off with the net he’d have beaten me. That’ll learn ya. My 5 weighed 6.80 & awarded me 3rd place….woo hoo….  I reminded him on the way home that I netted his 10.14 lbr last year in a tournament on this same body of water. We celebrated with a chocolate shake from MD’s going home. BTW winner Brian Reed was ripping a stick bait JUST LIKE KVD.  Reed also had big bass 3.22….He fished within 150 yards from Millich & I. Go figure! 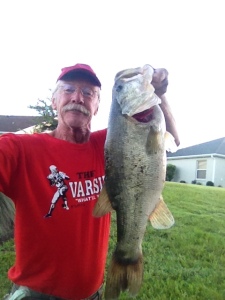 July 7, 2017 Yum Dinger strikes again….or is it the same fish??? Different shirt, hat, deodorant? FFCVP Rob Husson fishes the retention ponds in The Villages. He gets to his locations via golf cart NOT 65 mph hi-tech go fast water gadgetry. This is fish number 4 OVER 7 lbs that he’s caught in 2017. The day before he sent me a pic of a 7.0 on scales. Click on any pics to enlarge. Hey Rob where’s that selfie stick?

Not all are trophy catch – Is that a CARP??

Many are away from the humidity & located in the north someplace. Here’s Wayne Barksdale with a….wait a minute….that ain’t no smallMOUTH. Did you catch that on a doughball? I’m sure it put up a good fight anyway. You’ll have to fill us in on your technique….NOT!! 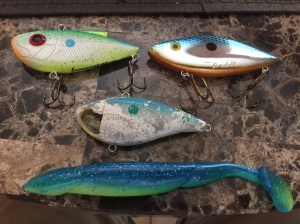 Here’s a bass that ate my last Citrus Shad colored XCalibur 1 Knocker. We’ve all got favorite baits  & recently that was mine. I’ve tried to find a facsimile but….close. Natalie at Brooker Bait in Leesburg said the bait company Boo Yah is coming out with other colors. By then I’ll probably have another favorite color.

The Livingston lipless crankbait worked catching, but I only heard it make noise for a few casts & the noise didn’t work immediately. Another quality Cheenuh product. I still see Bassmaster pro Randy Howells smiling face & him saying “She ate a Livingston baby”. You’d be happy too if you’d just won the Bassmaster Classic. 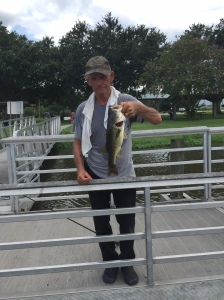 Here’s Mr. Rick that caught this 2 lbr at Herlong Park while walking the shoreline on July 18. Rick said he’d been randomly casting a white spinnerbait and been there about 20 minutes. I’d been out 5 hours and caught 4. My largest wasn’t much bigger than his. And that towel around his neck, not for wiping fish slime off his hands. Feel like temp was 102. 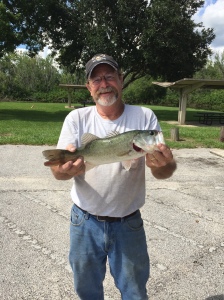 Mr Mike caught this bass on a black worm

And then, Mr Mike, full name withheld, shows me a 2 lbr he caught on a worm at Herlong Park on June 29. Had to laugh….not sure if he was in a witness protection program or what….he jumped out of the way of his parked vehicle to get it out of the photo.  Keep in mind that many local bass tournaments on Lake Griffin release their fish at the ramp. You can FIND most ANY Florida tournament scheduled on our web site by clicking on Meeting/Events & scroll down under NEAR-TERM MEETINGS & EVENTS ….FL Bass Tournaments.

Remember that a boat ramp is used often by boaters & local marine dealers to launch test boats. Some anglers get upset when a boater uses this area and disrupts their fishing. This is a BOAT ramp and not fishing ramp. Many boats are beached near the ramp dock while anglers get their trailers. There’s plenty of water surrounding the area for shore anglers access.

FLW is returning to the Harris Chain Feb 22-25 2018. WTG Lake County Tourism & Leesburg Pro angler Tim Frederick for promoting the area. If you missed the weigh-in last year, here’s your chance. Between now & then I’m sure we’ll see many wrapped boats pre fishing. Please show some southern hospitality & welcome them back.