No, Brownie isn’t referring to what our daughters belonged to nor does it mean that the dish on top of the stove, that’s too hot for human consumption, but not for the #@&%* dog….at least he saved me half….hell yes I ate them. 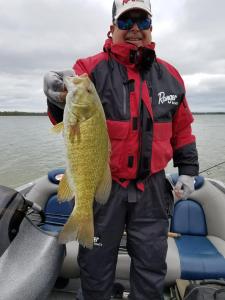 Brownie refers to what Ken Fox caught at Long Lake near Alpena, Mi. If you saw the action the anglers had on Major League Fishing, you know this area is loaded. Fox said he had 35 fish days throwing spinnerbaits, worms, & spooks catching fish up to 4.8 lbs. Fox did tell me that it was 25 mph windy days with rain & balmy temps to 58 degrees. BTW the brownie is AKA smallmouth bass. If you’ve never had the opportunity to catch these guys, you don’t know what you’re missing. 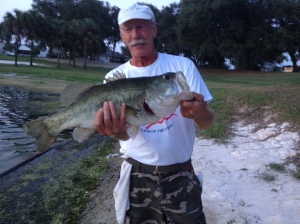 It’s May 29, Memorial Day, and FFCVP Rob Husson decided to do what he loves, fish the ponds in The Villages. Husson knows most or all the ponds accessible in the community. He’s provided us pictures before of bass exceeding 6 pounds but I believe this may be his largest that I’ve ever reported. Check out this 7 pound 1 ounce beauty. Husson said he caught this bass on a swimjig with a Houdini trailer. Also the pond that Husson caught his bass from had a major fish kill 3-4 years ago. This pond was featured in R&R mentoring session recently using the same lure. Here’s proof that the strong will survive. Husson’s fish can easily qualify for a fish of a lifetime for most of us. Congratulations VP Rob Husson on your 7 pound 1 ounce bass qualifying for the Fish Of The Month FOTM.

Veterans thank you for your service and God Bless America.