The FOTM (Fish of the Month) caught by John Hendry at Lake Okeechobee, weighed 10-8 lbs. Yeah a  Trophy Catch for sure. But there’s a problem….the problem was that John caught this bass 2 days too early while he was pre-fishing for a Bass Fishing League (BFL) tournament. Upon tournament day, Hendry did manage to catch 5 that weighed 12-5 and was good enough for 5th place that pays $942. Hendry has fished 100’s of tournaments but elected to fish this BFL event as a c0-angler or back of the boat. Yes he proved that you can catch fish behind someone that normally is a seine off the front deck. WTG John!!

I was fishing a small club tournament on Mar 28 at Lake Rousseau. Catching numbers wasn’t an issue. Catching sizeable fish was. Normally a topwater bait first thing in the morning works. Nope!! I went through an arsenal until I used a Senko and scored. Even though I caught this 6 pounder, it still wasn’t enough to win with the 4 additional squeakers. My 5 weighed 11-2. 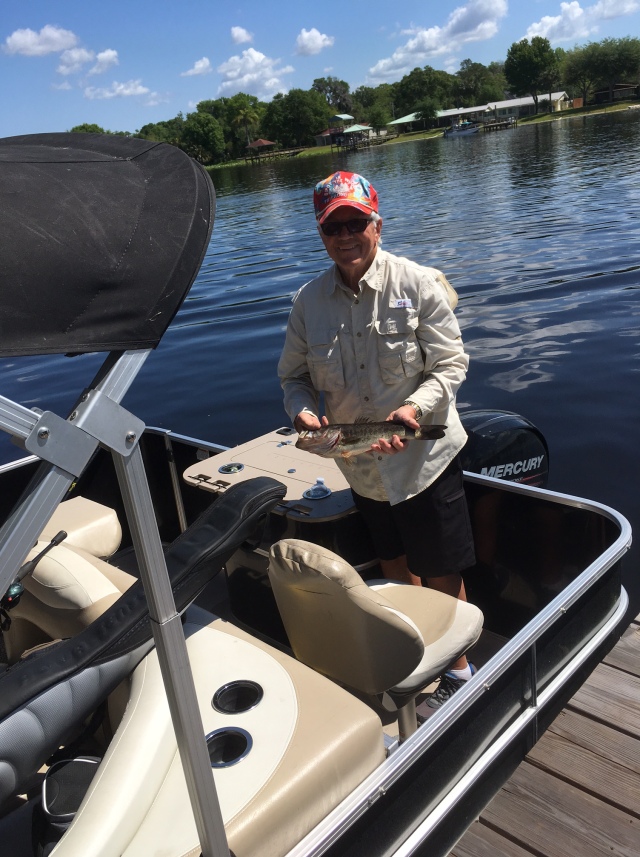 The FOTM – fish of the moment – & giant of the week was caught by Ron Freund while fishing with the FFC at St John’s River. Steve Felix, FFC fishing trip chair, says regardless of the catch results, the Castaways Restaurant is worth the trip to eat their clam chowduh. So keep that in mind on your next fishing adventure. If you’re a golfer you go to the 19th hole. Well if you’re fishing you go to….

Next FFC meeting, April 11, will be about panfishing. You want crappies & bluegils? Don’t miss it. Also we have nominations of officers for our upcoming election that’s held in May.