Felix Does It Again & Slim Pickins

It’s been years since we’ve been there with the FFC. As many know it’s not the easiest body of water to fill your creel limit or in many anglers case, catch anything. Of the 20 anglers that fished, I heard 7 bass were caught & Bill Gorman may have had the largest weighing nearly 2.8 lbs.

Afterwards we all went to Hurricanes Restaurant for lunch. The food was ok, camaraderie was better, and everyone seemed to enjoy themselves. I did hear Felix say that next month we’ll head back to Astor & fish the St. John’s River. And remember, you can’t blame your results on the trip planner. He performs a great service for all of us and is to be commended.

A local report received from FFC President Randy DiSanto shows Marilee Elias with a nice crappie, aka “speck” here in FL  that she’d caught at Summerhill on a fly rod. It wouldn’t surprise if they’re in most every pond in The Villages. Ya dun good Marilee.

Check out Ken Fox with a Lake Erie smallmouth that weighed 5.14 lbs….I sure do miss catching them but will stick to Florida fishing. This picture was taken  Oct 12….I can understand the sun gloves but wearing sweatshirt & long jeans….maybe Ken’s protecting his skin from the sun.

Nice smallmouth for sure….but  you aint got nuthin on me KENNETH. Check out this guy I caught at Eustis with the gang….put that on your hot dog bun & smoke it….and it probably would have fit too 🙂

Lake Deaton reportedly hasn’t turned on yet like it did last year, but it’s still early. Yes there’s bass being caught but not huge numbers. Gary Towers got a limit with his friend Joe recently. Also this lake is a crappie lake with some dandies being caught here under bobbers. Once the water temp drops in low 70’s they too will start. 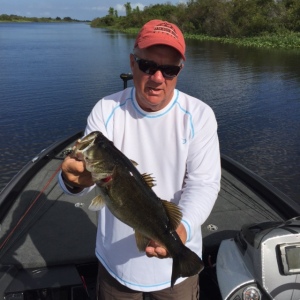 FFC member Bob Knorr fished a bass tournament at Kissimmee with his brother a couple weeks ago. Bob said it took 34+ lbs to win the 2 day event. Bob & his brother came in 3rd with over 18 lbs. Good job guys. Just wait a couple months and you’ll see it take 34 lbs to win a 1 day tournament….and that’s 5 fish.

Citrus County bass tournament director Bill Genes said there were 14 anglers on Oct 18 that fished the Tsala Apopka Chain & launched from Lake Spivey near Inverness. A total of 28 fish caught….winner had 5 fish weighing 7.52 lbs & that angler also had Big Bass weighing 2.93…. Yep – welcome to the Tsala Apopka Chain. Just remember that next cast could be a Trophy Catch….ask Don Millick at the next FFC meeting about his Trophy Catch certified winner that weighed 10.22 lbs.

Not valid with any other discount. Applies only to FFC members in good standing

The next FFC meeting is on Nov 8…. we’ll have proprietor Bill Brooker of Brooker Bait & Tackle in Leesburg along with touring FLW Bass Pro Tim Frederick & Shimano sponsored B.A.S.S. Open Angler & Guide Captain Grady Maynard. You want to know about the Harris Chain….don’t miss it.