Are Things Getting A Little Squirrely?

Have you ever had 1 of those days/daze when everything you touch turns to…..well you know. OK not everything – just the trolling motor plug….the female portion….come on….what can go wrong….14 years of abuse

lets just say that I ordered a new one….after I went to the bank & applied for a 2nd mortgage to pay for it. I mean come on!….it’s only a female plug for 24 volt system. “Sir it’ll be here tomorrow”. We’ll see.

In the mean time Don Millich texts me that he & his guide Captain “Fishin Fill” McNeal went to the saltwater this morning & had to rub it in. Yeah I know it’s saltwater, whose writing this anyway? Not only that he caught a 35″ Snook & a 34″ Red Fish….he goes on to mention that he’d gotten 3 other Reds but not as large. Don said he also felt sorry for his guide because he blanked, but went on to say he quickly got over it.

Moving write along….ya like that? I did fish a week ago only to see 2 airboats zig zagging back & forth spraying at Griffin. Did it need it? Unfortunately it’s the nature of the beast and yes. I didn’t get skunked …although some may say I might as well had.

Click on any pictures to enlarge. Except you don’t have to click on ALL of them to recognize that there are some decent fish that were caught.

Such as VP Elect Rob Husson. Rob and President Elect Randy DiSanto have been having a blast catching Tilapia on fly rods here in The Villages. Here’s Rob holding a nice 2 lb 4 oz Tilapia. That fish had to put up a helluva fight. I keep calling them bluegils on steroids. And yes it was that large on digital scales. Nice fish Rob. 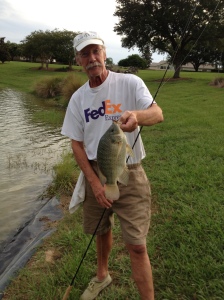 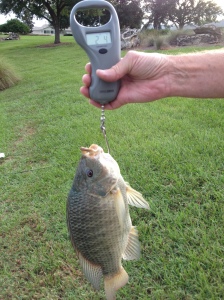 Not to be out done – okay maybe he was out done. Pictured below left holding his fish that he’d caught on a fly is President Elect Randy DiSanto. It appears that he may be giving me the bird while I snapped his photo but I can assure that was not his intention….I think. Our snowbird FFC member Jim Lovegrove is showing nice sized smallmouth he’s been catching while he spends his summers in Ontario. Jim & his friend Phil Smith have been catching smallmouth for a few months like this. Hey Jim, it appears that Phils is larger 🙂

Prsident Elect Randy DiSanto says you can catch these bluegils 4′ off the shore.

Below left is FFC Board Member Don Kindilien holding a mouth watering walleye….1 of 30 that he’d caught while fishing the French River in Noelville, ON area. Fire up the skillet. 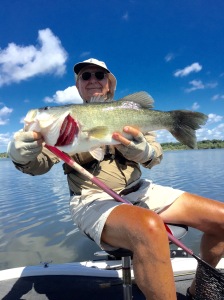 Here’s FFC Treasurer Jerry Lester holding down the back deck when he says “I got one….I think it’s a good one….it’s taking drag.” Time to try out my trusty rubberized net. After a few surges the fish came alongside the boat & slid into the net….the scales read 6 lb 10 oz. Nice fish Jerry. Aruku Shad strikes again.

And the next time you’re told to expect 5-8 inches of rain over the next 4 days don’t hold your breath. I received 1/4″ during that time period watching the radar lit up like crazy only to bi-pass us. The gulf area got flooded especially in the panhandle.

Like I say….things are a little squirrely around here lately.