Posted on June 10, 2016 by tvfreshwaterfishingclub

A  strange looking fish was trapped on  the flooded balcony of the La Hacienda Rec Center. This young man showed it to the curious onlookers. 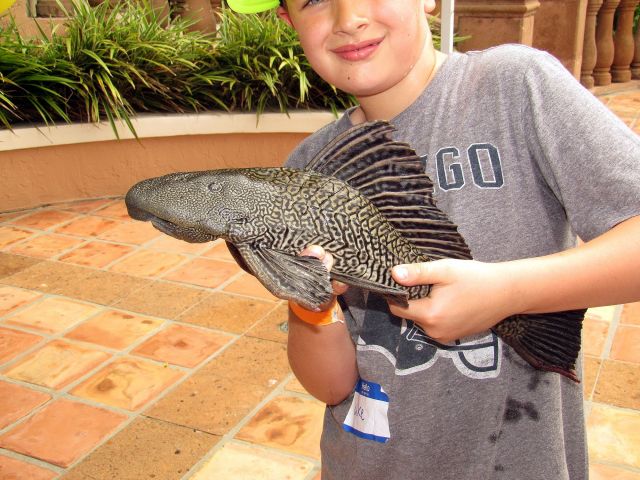 A guest correctly identified the fish as a member of the Sailfin Catfish Family.

All three suckermouth catfishes (family Loricariidae) in Florida have rows of bony plates covering all but their belly area. Sailfin catfish are distinguished by worm-like pattern of dark markings on the head over a dark-golden background; pectoral fins stout with rough surfaces resembling course sandpaper; disc-like, protrusible mouth is under the head, and used like a suction cup to attach and feed on algae; females tend to be smaller, and fish larger than 18 inches probably males; lifeless and hollowed-out ‘armored’ bodies sometimes seen on canal and lake banks

Vermiculated sailfin (Pterygoplichthys disjunctivus) and suckermouth catfish (Hypostomus sp) are also found in Florida; vermiculated sailfin catfish have worm-like markings similar to but generally bolder than sailfin catfish which is the easiest way to distinguish these two species; suckermouth catfish is a shorter, stouter fish (maximum size less than 17 inches); has a pattern of black spots on head and less than 10 dorsal fin rays while other loricariids in Florida have 10 or more dorsal fin rays and worm-like markings on head.

Grow to more than 20 inches and weights of 3.0 pounds.

None; no bag or size limits

Fair to good, but difficult to clean and best to cook ‘in the shell,’ after which the white flaky meat can be slid out.

The fish on the right, a  Vermiculated Sailfin Catfish seems to be most similar to the species found entrapped on the flooded balcony.  (Thanks to the Florida Fish and Wildlife Conservation commission web site.)