Posted on August 27, 2015 by tvfreshwaterfishingclub

What are the bass hitting on lately? Some say throw squarebill crankbaits….some suggest to pitch creature baits in their favorite cover….others may toss worms under docks….the list goes on. But have you tried throwing topwater jerkbaits or popping type baits in open water? The deafening silence can change to pure pandemonium and then back to total boredom. So how do you keep the action going? There’s one lure that may be the answer. Today the action was going….for at least 1 of us….me….I turned to my fishing partner, Don Millich,  & tossed him a Rebel Pop-R.

Until a few weeks ago, I couldn’t remember the last time I’d thrown a Pop-R but it was game on then & same for today. Don was using a facsimile but wasn’t getting a sniff UNTIL he tied on the Pop-R. 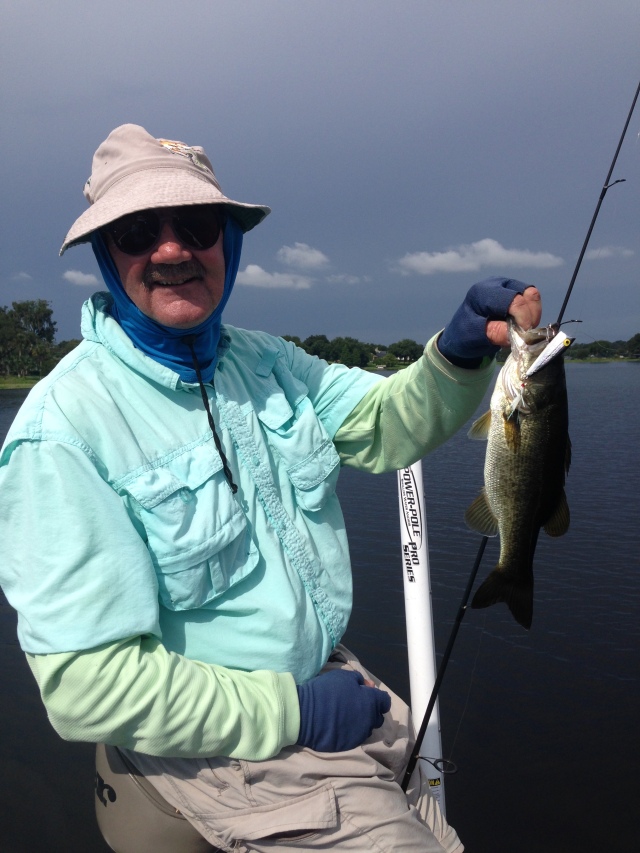 His first cast he hooked up….I didn’t say he landed the fish nor was it a giant – but at least he got bit. That’s the fun & frustration when these green fish decide to go airborne. For the next few hours we landed a small percentage of fish that struck the Pop-R’s but even the ones that we did hook were no guarantee to come in the boat. None of our fish were over 1 lb 4 oz….just like in the picture. Sure a giant sized bass would be a preference but a topwater explosion is always a heart stopper. And YES we had our chance to boat some bigger bass.  Don had a 3-4 pounder on and I had my hooks  straightened. And you thought that was thunder you heard….HA… that was just us hollering when we lost our fish.

Just remember that sometimes it’s the little things that matter.