Posted on March 4, 2015 by tvfreshwaterfishingclub

Had some equipment issues recently that I’ll touch on later ….but this past weekend I worked The Villages Outdoor Expo greeting thousands of anglers with questions about everything…. There’s a saying if you can’t dazzle them with brillance you can baffle them with BS….I was in my element…. who duh buhleeved …. The next time though I’m gonna wear a sign that says “If you think you need a license buy it!”

One guy asked about keeping swimbaits on his hook because they have a tendency to slide down his jig. There are jigs available with built in keepers to prevent your bait from sliding down the hook….some have cork screw type holders that you screw the head of the bait

Keep That Plastic From Sliding

onto….others have a wire keeper that once the bait is slid on the hook it penetrates the bait preventing it from sliding down …. & my favorite has always been super glue.

I’m not a fly rod guy but here’s a young man that learned to tie flies at the ripe old age of 10…. Troy has been tying for 2 years now and is a natural….

Troys Been Tying Flies For 2 Years

I wouldn’t know a muddler minnow from a grasshopper but Troy can create anything your imagination desires. My partner at the Expo, Randy DiSanto, asked him to tie a couple flies for him. Troy was amazing & it was great to see him carry on a tradition.

My catching results and others recently have been “slim pickins”….It’s crazy because 1 day I’ll whack em & the next day ????

On Feb 24 a small bass club held a tournament on Lake Rousseau. 19 bass weighed….1st place was 5 that weighed 6.55 lbs. BIG BASS was 5.92…. Mar 2 I got a report from Hernando…. the angler crawled his way out thru the fog only to get blanked after 4 hours….this writer caught 1 small keeper and several waivers the same day. There wasn’t a puff of wind. Normally I start late so there’s a breeze because I’ve seemed to always do better when there’s wind. I was on Harris. Saw water temp up to 69.7. 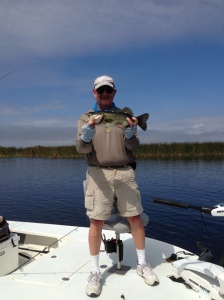 Here’s a friend Don Millich holding a 2 1/2 lbr that he caught on a fluke….does this sound familiar???He’d been on the water since dawn & said he’d caught 18-20 with the largest going 3.5 lbs.

My equipment woes have been a real PIA. It all started with a 10 month old 3 bank battery charger that failed…. 2 yr warranty so I exchanged it for the same item…. after installation the NEW charger failed to shut down after supposedly charging….The factory tells me that the new charger didn’t recognize the batteries so go ahead & plug it in over night & call us back if there’s no change…..well guess what – no change – I didn’t call them back but returned the charger & bought a DIFFERENT BRAND….came home & installed it….

4 hours later all 3 batteries were showing green indicating fully charged….I wish my catching rate matched the newest charger rate. Then again at my age if I can recharge in 4 hours it’s gotta be good.

NOTE: There’s many local tournaments being held every weekend around the Harris Chain & others. Go to any of the ramps around 2 PM on a weekend & watch a weigh-in. You’ll scratch your head asking, ” where’d they catch these giants?”