Posted on August 12, 2014 by tvfreshwaterfishingclub

Pre-dawn skies were full of lightning in the gulf and of course it was heading inland. Tournament start time was 0630….rain start time was shortly thereafter. 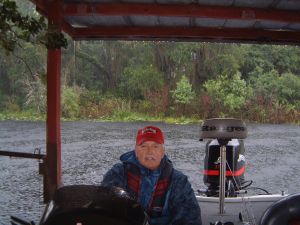 Did it make a difference?….a few quit….a few hid (me) until the lightning subsided….did the fish bite? Not so much….of the 19 anglers there were 28 fish caught….3 anglers weighed in 5 fish limits….Big Bass was caught by Foy Underwood weighing 7.6 lbs. Underwood wasn’t giving up catching info but he has been known to favor the late Top Water Charlies favorite bait “Devils Horse”. This was to be Underwoods only fish.

First place was this writer with 5 fish that weighed 9.7 lbs. I caught my fish on 2 baits….toad & spinnerbait concentrating on pads & grass.  When I made a pass down an area and caught a fish I’d turn around and fish the same area again. Sometimes persistency pays off. In my case it did.