Posted on March 9, 2014 by tvfreshwaterfishingclub

My bride said, “Honey I’m going to an art show today. You wanna go with me?…. HA!…. Not in your life time I thought. I said, “No thanks, I’ll probably just fish today instead.” How’d ya like them apples?!?!? I got out of that one.

Although it was a late start, 8 AM, thanks to the time change, I figured it would help the water temperature increase and maybe turn the bite on….maybe.

But first I drove to the Dam Diner & ordered a light breakfast called the Triple Play….three eggs, sausage, bacon, grits, pancake, and I think there was toast in there someplace. Oh yeah coffee too. Home cookin by some great folks. Just don’t have blood work done the following day.

After breakfast I drove about 1/2 mile to the parking lot of Moss Bluff Lock & Dam. There’s a single wide concrete ramp and floating dock. The facilities are adequate and better than many I’ve been to. There is a $5 launch fee.

After launching the boat I started directly across from the ramp throwing a toad. I caught 1 dink in the first few minutes. With a lull in the action I fired up the big motor and headed south down the Oklawaha River. After a 2 mile run I shut down & grabbed a flippin stick with a Paca Craw, then grabbed a worm, another creature bait, baits, frog, & went back to a toad. 12 months earlier I had a friend visiting for a week. During his visit we tore em up. Was not to be today. Final tally was 2 dinks & 1 keeper.

On the way back to the ramp I saw an angler that was 150 yards behind me going down the opposite shore. I stopped & asked him if he was doing any good? I told him what I’d caught & he said they hadn’t turned on yet. I thought no argument there. The angler was a local from Okalawaha and said he fishes the BFL circuit. 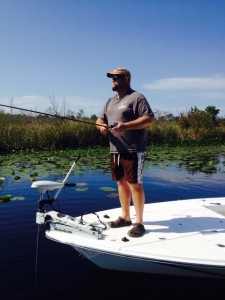 BFL is affiliated with the WalMart FLW  Tour covering 14 divisions. Regardless, today “both” of us were fun fishing. With todays results being lousy, it was better than attending an art show….at least for me.